We’re at the crossroads, my dear
Where do we go from here?

After Imelda, I’m afraid we have to start having a serious conversation about the future of Houston.

Catastrophic floods are coming to Houston at an unprecedented clip, and it’s only a matter of time before parts of city will be underwater again.

The Houston Chronicle published an article asking if it’s worth staying in Houston after these floods. Personally, I not sure I would want to stay in Houston if my home flooded during two or more of the events above. The problem is how do you identify the areas that need to be closed permanently, and then how can you force people to stop rebuilding and/or forcing them from their homes.

The easiest way to pick a fight with a Texan is to threaten their land.

Where do we go from here?
All I can do is, follow the tracks of my tears

That is nothing to say of the particularly troubling realities of relocating heavily flooded neighborhoods like Meyerland. Meyerland has long been the proverbial home of Houston’s Jewish community. It has been wrecked by all of the aforementioned floods, and has led to a “loss of faith” within our Jewish communities.

But even if we believe the best solution is to close off large parts of Meyerland, how do we also protect the Jewish community, and everything it does for all Houstonians?

This is only part of the greater conversation about how Houston must respond to future flood events. In the cases of the Memorial and Tax Day floods, it’s not clear there is much that can be done to prepare. However, in the case of tropical storms and hurricanes, I feel it may be necessary to start shutting down the city ahead of such events. I know it may seem ridiculous, and it would most certainly result in the occasional false alarm, but think about the alternative.

I was talking to a friend about Imelda. Her son was trapped, but very safe at his school. She wasn’t worried about him, but she felt an acute anxiety about the idea of not being able to reach her child.

What if things had been worse? What if children had been trapped late into the evening or over night? What about this? 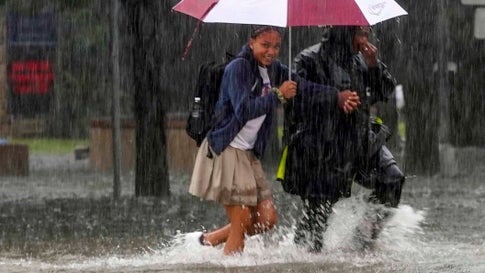 I refuse to believe needlessly keeping children home in the face of a storm threat is worse than putting children in this or similar danger.

It will take considerable thought and consideration, but it needs to happen. After all, putting the safety and well being of our citizens is the most Houstonian act of all.

Where do we go from here?
All I can do is, follow the tracks of my tears