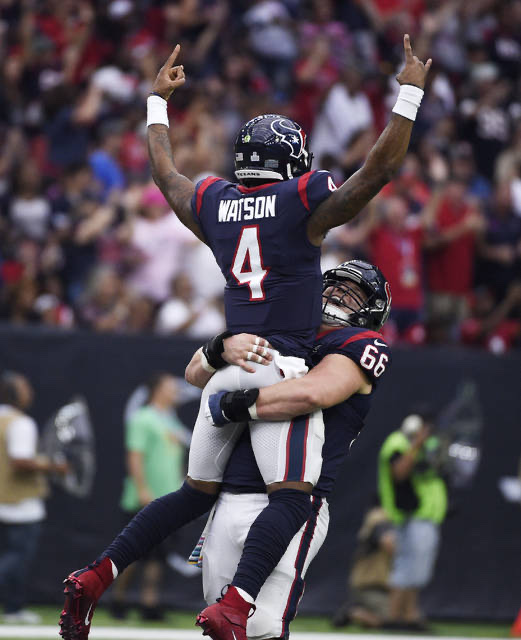 So far this season, the Texans are something of an enigma. I really can’t tell what we have on the defensive side of the ball. While J.J. Watt is certainly rounding into regular form, this team still hasn’t turned out a great defensive performance. And while they had a number of great plays and stops against the Atlanta Falcons this week, they still allowed 32 points to a 1-4 team.

The offense, on the other hand, appears to be a juggernaut as long as Deshawn Watson stays vertical during the game. After the debacle last week against the Panthers, Watson turned the closest thing to a perfect game by ANY player in NFL history. For the record, he is the first player in NFL history to pass for 400+ yards and 5 touchdowns with 5 or less incompletions.

However, this being the Texans, we have our infamous nemesis, the Indianapolis Colts, to thank for possibly making things much more difficult next week against the Kansas City Chiefs. Not only did they hand the Chiefs their first loss of the season, they shut them down at home so badly they are likely to coming into this weeks matchup against the Texans looking for blood.

The good news is they may have also provided some dirt on how to shut down the unstoppable Chiefs offense. Of course, if the Watson and the Texans offense can start putting up the same kinds of numbers from Sunday, the defense can get away with letting the Chiefs score thirty or more points with abandon.

After five weeks, the Texans are 3-2. I still believe they will win the division, and make the playoffs with a final record of 10-6. That’s a somewhat optimistic take built on what I hope to be the Texans’ first 6-0 season against the AFC South. We’ll see.

That’s all my prognostication I’m prepared to print for now. See you next Tuesday.